The Pressure to be an Alpha

I’m what’s known as easy on the ears. People say that I have a deep, resonant voice that is assuring. I tell myself I would trade it all to be easy on the eyes. Good looking seems to always win out over good sounding. 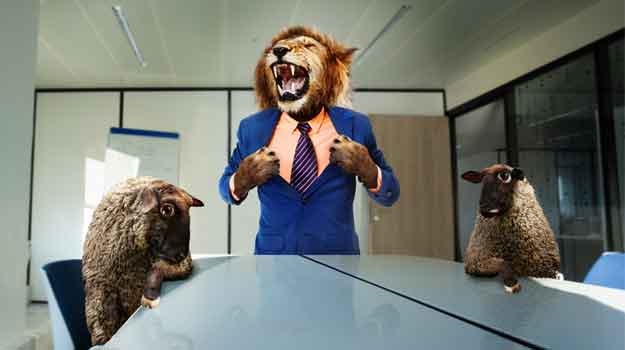 We don’t always get to choose these things though, do we? In many cases it has been decided somewhere that one attribute or type of approach is better. And of course, a better approach is heavily dependent upon the result that matters.

Case in point is the pressure imposed to be, or become, an alpha leader. I’ve had a number of conversations with people who have struggled with the pressure to conform to a style that is not natural to them because funders and investors believe that this is how true leaders should present themselves. There is no shortage of writing about how leaders have long felt a pressure to follow in the footsteps of white, straight, male leaders of the past. There are some fine people on that list, but let's not kid ourselves about that being the best style of leadership in all, or even most situations.

Very simply and broadly stated, alphas are supposed to be decisive and rule aggressively with everyone around them being well aware of who holds the power. In contrast, betas with a more egalitarian approach can be viewed by some as soft, indecisive, and lacking true leadership ability. The belief is that their approach to buy-in will result in change happening slowly, or never.  And so, I’ve known leaders who have been pushed to ‘harden up’ if they are going to be taken seriously. I know that these are very general overviews, but they hold with the not-so-nuanced way that people describe others.

The world suffers mightily for not allowing, or even seeing, the diversity of approaches to being a leader out there. Many of the alpha leaders I have known have been doing a kind of alpha drag for a long-time. And they are tired. And they are isolated. And they have discarded part of themselves because they were told it had no value. Maybe they believe the act now, but they know that they were built on a specific foundational understanding and loath the idea of making a change.

When I work with alphas, I often find it easy because they have been lacking a conversation partner and feedback for forever. They are so dedicated to keeping up a persona that they also often don’t have authentic conversations.

And when I speak with women or bipoc people they already have people questioning whether they can be leaders based on their genetic make-up and now we’ve a new disqualifying reason that they can’t be in charge. And many don’t feel drawn to lead in that prescribed way.

Interestingly enough, some of the folks that I’ve seen struggle the hardest with this are actual straight white men who have shared with me the conversations where they were told they needed to conform or step aside.

I’ve always been of the school that you should really embrace your strengths and weaknesses and try to build on them. I feel like I’ve always enjoyed being a 1B. I’ve enjoyed taking on co-leadership where people knew their roles. AND work with others that they trusted to own the pieces that they may not have excelled at or enjoyed doing as much. To be fair, I’ve also never been as motivated by titles as some are.

Some of the existing institutions struggle with new approaches. That’s why so many people are motivated to creating something that looks like them and also approaches the world the way they do. I was speaking with a particularly brilliant founder not so long ago who shared with me his approach to developing talent that others couldn’t see because they didn’t conform to the amount of education or the set of schools that others thought mattered. He was also open to developing talent in ways that many people wouldn’t because they didn’t want to take a risk. And initially I was very concerned for him and his process, but then I was struck by how consistent it was to his visions. And I actually pushed him to be even more direct about that with investors and staff.

Be the leader that is consistent with your values and goals. It doesn’t mean we aren’t learning to be better and bringing on people who shore up our weaknesses. It just means that many of your glorious strengths need not be rooted out and tossed in the scrap heap. Rather, that you are building something that may currently be less present but remember that for a while steam engines and telegraphs were dominant too.