Strike a Chord in the Music Industry

Got big dreams of being a rock star—playing sold-out shows nightly to thousands of adoring fans? Or maybe you would be perfectly content with simply making a modest living with your music—having left any visions of grandeur behind long ago. Regardless of where you would like to end up in the future, figuring out how to break into the business can be overwhelming. 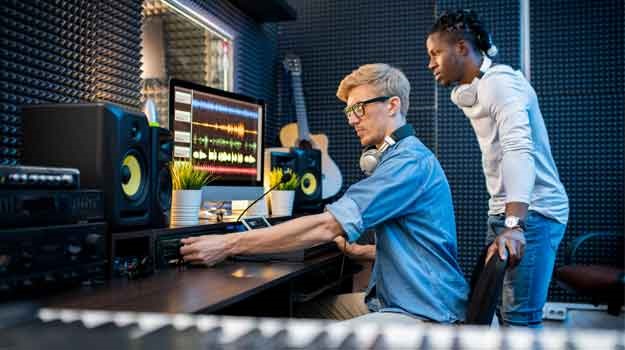 Some people spend thousands upon thousands of dollars on school to study how to be successful through song, while others seemingly have every dream fall into their laps struggle-free. At the end of the day, there never seems to be a straightforward solution for surefire success. Fortunately, while there are no guarantees you will succeed, there are some steps you can take to help you strike a chord in the music industry.

As the old saying goes, “It’s not what you know, it’s who you know.” However, in the music business, the more accurate expression is, “It’s not who you know, it’s who knows you.” Those in positions to advance your career can’t (and more truthfully, won’t) help you if they (or someone they trust) do not know who you are. That is exactly why networking is arguably the single most important thing you can do in order to succeed in this industry.

Whether you know it or not, everyone you meet has the potential to help you get where you want to go. Your friend’s girlfriend’s roommate’s dad might be an entertainment lawyer who can submit unsolicited music to major labels on your behalf thanks to their industry connections. Your friendly neighborhood barista might be a filmmaker that has been searching high and low for someone to score their new movie. Whatever the case may be, you have to be continually networking as you never know how the next person you meet can change the trajectory of your career.

That said, some people have been blessed with the “gift of gab,” and tend to be extraordinary networkers. The ability to speak comfortably, eloquently, and persuasively can go a long way when you are trying to form new connections in the business. On the other hand, if speaking with others doesn’t come naturally to you, networking can seem impossible. But don’t be discouraged. The more you do it, the easier it becomes. You might lack the finesse of the naturally gifted, but you will still make the connections you need to help you along the way.

Self-promote your way to success

Self-promotion goes hand-in-hand with networking. You need people to know who you are and what you have to offer. You have got to want to share your work and ideas with the world and you’ve got to be your biggest fan. After all, if you do not believe in yourself, how can you expect anyone else will?

With the advancements in technology over the past few decades, it may seem like it is easier than ever to promote your music. What used to be accomplished through handing out flyers, constant touring, and airplay on college radio, can now be done without leaving the comfort of home.

However, because it has become so easy for anyone to self-produce, -distribute, and -promote their own music through the use of new technologies, the online space is now flooded with artists vying for people’s attention. You will have to find a way to stand out from the crowd, and you should take advantage of all social media platforms and the entire blogosphere in the process.

While self-promotion is essential, be careful to avoid shameless self-promotion. This style of selling yourself can come across as obnoxious and overbearing, and you will run the risk of turning off your potential audience. At the end of the day, you can still be confident while exercising a little bit of subtlety.

As we stated earlier, there are no guarantees you will succeed. But you are only guaranteed to fail if you give up. You have to be persistent and keep reaching for your dreams if you ever hope to make it in the music industry. No matter how many times you are rejected, poorly reviewed, or even completely overlooked, you need to keep going. Think of each disappointment and/or failure as an opportunity to refine your path to success.

Conversely, some fail to keep pushing forward after receiving any amount of praise or success. Do not fall into this trap. Everything you have worked toward can disappear in an instant and resting on your laurels is a great way to get left behind. Stay on the path and work persistently to perfect your craft.

Finally, you may think there is such a thing as an overnight success, but there is not. It is a nice thought to entertain, but it is really just a narrative created to sell you something, or more accurately, someone. Making it in the world of music typically takes a lot of hard work, time, and dedication. Incorporating these suggestions into your plan for success will help you strike a chord in the music industry.

Steven Weidinger studied music business and songwriting at Berklee College of Music. He has written, produced, and published a catalog of 100+ songs and secured music placements on numerous domestic and international television programs, movies, commercials, and compilation albums.