Off With the Business Suit, On With the Nurse Shoes

"It was a good job, but there was something missing for me." That's how Tsehay Haile felt in 2010 as she contemplated a career change from banking to nursing.

Healthcare is one of the fastest-growing U.S. industries. And nursing will be among the most in-demand occupations. Even as many nurses retire, in the decade ending in 2022 nursing jobs will grow by 527,000 to 3.23 million, according to the Occupational Outlook Handbook. 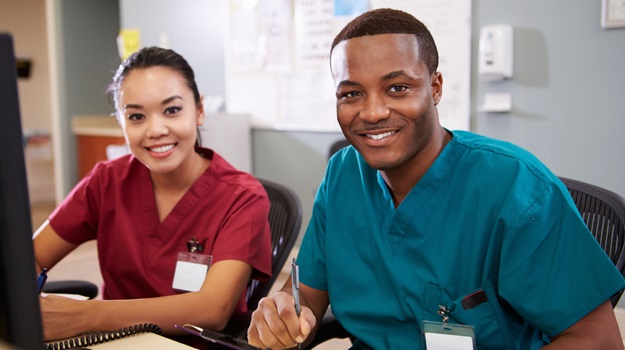 Nursing jobs are plentiful in most care settings, and opportunities for further education and specialization abound. The salary, with overtime or in advanced nursing specialties, can reach six figures. Median pay for staff nurses in the District is $76,890, according to Salary.com.

The training is intense, and working conditions range from thoroughly professional to nearly intolerable. Bedside care is physically demanding: in a study cited by the American Nurses Association, 38 percent of nurses suffered occupational back pain that required leave from work.

But many nurses say that helping vulnerable people heal is the most gratifying work they can imagine.

Holding a bachelor's in geology, Haile immigrated to the United States from Ethiopia in 1995. Over 14 years, she worked her way up in banking, from teller to branch manager. "Finally I decided to do what I’m passionate about, which is healthcare – even though I don't like blood," she says.

While still at the bank, Haile began taking nursing-school prerequisites at Prince George's Community College, from biology, chemistry and math to English. "I started wearing nurse clogs to work, because I was following that dream," she says. When her long working hours began to conflict with evening classes, she gave notice at the bank. "It was the most terrifying thing I’ve ever done," says Haile.

In 2013, after two years of full-time study at the community college toward an associate's degree RN, Haile transferred to Bowie State University. "The Bowie program was much tougher. My kids didn’t even see me, my poor husband had to put up with a lot," she says. In December 2014 Haile graduated from the accelerated Bachelors of Science in Nursing (BSN) program at Bowie State.

Haile’s nursing education was paid for mainly through federal and state loans and grants.

Immediately after nursing school, "I applied to a few hospitals, and even before I took the nursing boards, Washington Hospital Center interviewed me," Haile says. "They offered me three possible positions: in medical/surgical, stroke or oncology."

As a clinical nurse in oncology, Haile cares for patients ages 20 to 100 who are confronting mortality. Despite – or perhaps because of – the gravity of her patients' illnesses, "I feel like I’m in the right place," she says. And Haile has learned through experience "to deal with bodily fluids. Blood doesn’t bother me any more."

On the home front, "we're still paying off debt, but we're catching up," says Haile. "MedStar is the highest paying hospital in D.C., and they give you a lot of opportunities."

John Rossheim (@rossheim) is a freelance journalist who writes about employment trends, healthcare, technology, and travel.