Where once it was typically criminal justice students who joined a police force, today patrol officers come from all walks of life and backgrounds. The Metropolitan Police Department (MPD) exemplifies this new era of policing. Consider the photographer and Emergency Medical Technician (EMT) who spent three years in Africa—returning to D.C. because he felt called to serve the city where he was born. Or the event planner, who instead of continuing to plan weddings, decided instead to help MPD plan strategies for more effective policing. 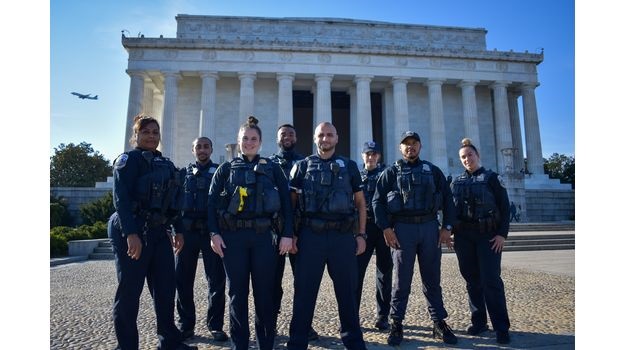 As one of the 10 largest police departments in the United States, the MPD offers many diverse opportunities for public service, career advancement and mobility.  For those interested in supervising and management opportunities, after just four years of service (including your time at the training academy), you can participate in the promotion process. The first step is to become a sergeant; then after two years you could be promoted to lieutenant; and after one year in that role, a captain. How many careers offer the possibility of such a rapid rise in a relatively short amount of time?

MPD also has more than 30 specialized units, including Harbor, Air Support, and Canine. These units generally require patrol officers to have three to five years as a patrol officer prior to applying for these positions.

Patrolling isn’t just about fighting crime. It’s also about building strong relationships with our communities. Getting to know those you serve. Connecting with people not just as an officer but as a trusted partner in keeping our city safe., Making a positive impact and giving hope to those who live under challenging circumstances. This kind of impactful community engagement is in MPD’s DNA.

Are you an artist, a writer, a musician, or someone else who thrives on being creative? You can bring those talents to MPD as well, particularly for our city’s youth. In fact, many of our current youth programs and community outreach programs were developed and implemented by patrol officers, whose talents and compassion can make all the difference in a child’s life.

Does solving mysteries interest you? Are you an analytical thinker? Many people enter policing with the dream of becoming a detective. Within three years at MPD, you can make that goal a reality. MPD has hundreds of detectives across numerous investigative units including Homicide, Special Victims Unit, Sexual Assault Unit, Bank Robbery and Kidnapping Squad, and more.

Collaboration and communication both within MPD and across other agencies is key to fighting crime. As a police department located in D.C., there are unique opportunities to work with numerous federal task forces with agencies such as the Federal Bureau of Investigation (FBI), Bureau of Alcohol Tobacco, Firearms and Explosives (ATF), and the Drug Enforcement Administration (DEA). Experienced detectives often serve on these types of task forces.

No matter your background, if you are interested in becoming a police officer, you are invited and encouraged to join the Washington, D.C. Metropolitan Police Department family. We could benefit from your belief in the importance of public service, your unique talents, and commitment. You can benefit from the incredible opportunities a career in policing offers.

Visit JOINMPD.DC.GOV and get started today. MPD hires academy classes monthly, and there is no waiting list to join. Our background investigation process is thorough, but we work intentionally to keep you informed and moving throughout the entire hiring process.