I met Jamie McGonnigal almost ten years ago when he was in the middle of making a career transition. He’s a terrific person to learn from for those of you who feel like they have diverse interests that tend to confuse others. Jamie resides in Hyattsville MD and transitioned from being a theater performer and producer to working in tech sales. He received a BA in Theater Arts and now serves as the VP of Sales at Impactive and as an Associate in Storytelling & Messaging at KNP Communications. 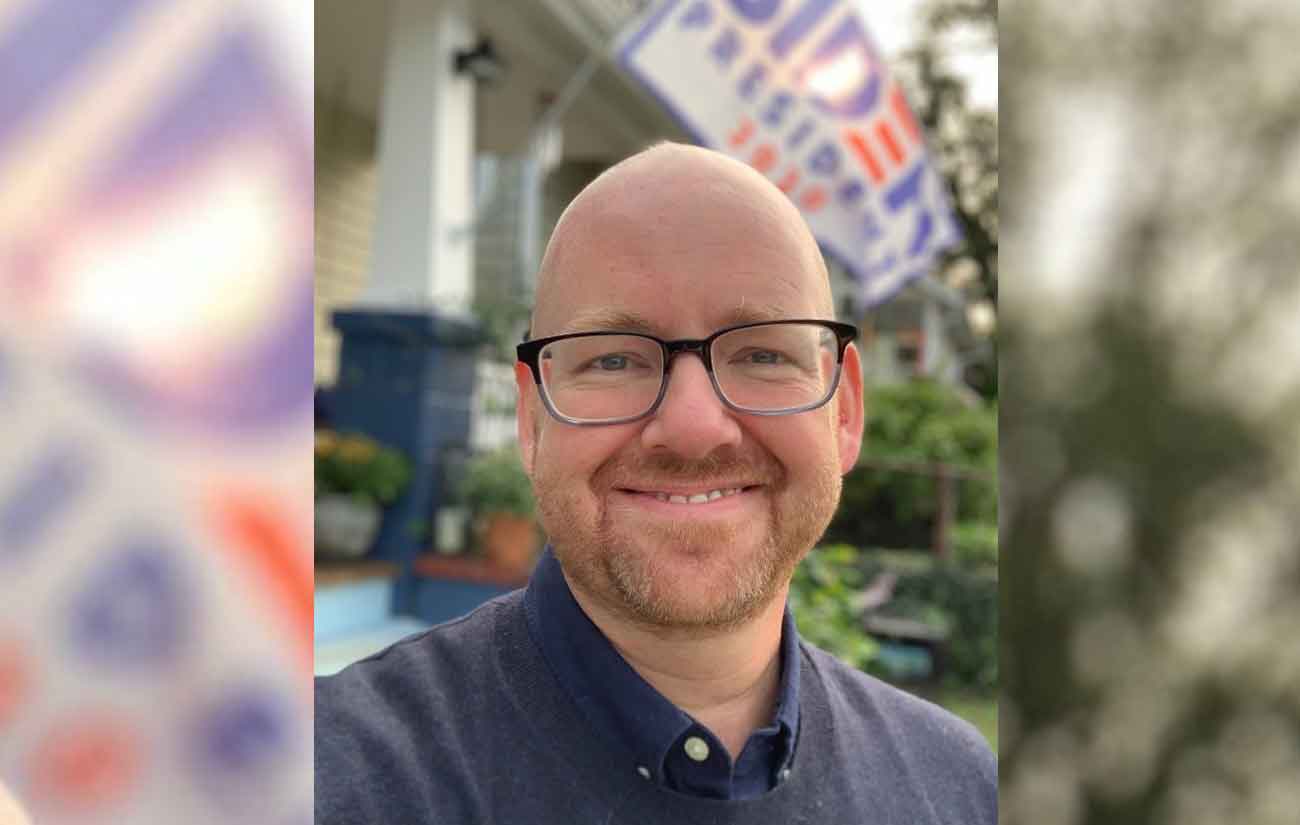 In two-three sentences how would you describe what you do most days/weeks? I find folks who are looking to empower their causes with top notch communication tools. While I’m in sales, my approach has always been that I have something important that can actually move your work forward in extraordinary ways. I don’t beg, I build relationships and help friends, old and new, find solutions for the challenges they face.

What did you want to be when you were eight? A Broadway actor. Or Eva Peron.

What did you learn about work that you learned from your family?  I was raised by a single mom who frequently worked 2-3 jobs to make ends meet for her 3 boys. She worked hard but it was always a means to an end. While she was good at what she did - frequently telemarketing, she didn’t love it. She didn’t care about what she was selling and what she was selling had no potential to change people’s lives. What I did learn from her is that relationships are the most vital part - whether you’re selling something or just trying to make it through life. And the more genuine those relationships and connections are, the more you can give and learn from one another. Not everything has to be transactional.

What professional experiences/employers had the greatest impact on you? This is an interesting question because impact can be both positive or negative. When I lived in New York, I started out as an actor, and then over time, transitioned into producing and directing Broadway concerts. I was making things up as I went along - doing voices for cartoons, which paid the bills for the most part, and then organizing these big Broadway benefit concerts with the rest of my time. I’d come up with an idea - either do a concert of a musical I loved, or I’d find some kind of theme - a concert of songs cut from beloved musicals, or Broadway Loves the 80s - with Broadway stars singing their favorite 80s tunes. Then I’d find a venue - usually Joe’s Pub, and I’d find a charity to benefit. It was all so incredibly fun for me. I was getting my name out there, alongside all these fabulous performers, and I was making a bit of a career for myself. I was known as the guy who did the benefit concerts. Charities would call me and ask me to produce an event for them, or actors would call me and ask me to direct their one person shows. And it was all a blast. I learned that I could make my own path in an industry that I loved. Paying the bills wasn’t always easy as the benefit concerts were all volunteer work, with the occasional exception when I would be hired to do one.

So I took a job as a personal assistant to a wealthy woman on the Upper East Side. They lived a block from the Metropolitan Museum of Art in a six story brownstone. My office was a 6’x6’ cutout of a family room on the 6th floor. My first day, literally an hour into the job, she handed me her credit card and told me to go buy her youngest daughter a gift for her 16th birthday which she’d forgotten. From that day forward, I continued to accomplish literally every outlandish thing she demanded. From escorting her daughter to a horse jumping competition in Florida, to planning very elaborate parties at their estate in upstate NY, to contacting attorneys when one of their children got arrested for shoplifting. And for everything I did right, I was made to believe I had never done anything properly in my life leading up to that particular moment. I was micromanaged, and had to give a daily list of each individual task I accomplished that day, which she would make notes on and leave for me again the next morning so I could correct all I’d done wrong. Her office was on the floor below mine and at times, she would sneak up the stairs and if God forbid, anything was on the computer screen I was staring at that was not directly related to work I was doing for her, she would lose her ever loving mind. She would scream at me and berate me and make me feel as if I was actually stealing from her because I’d opened Facebook momentarily.

The job paid extraordinarily well, and came with a very generous cash bonus at the end of each year - which she’d usually forget to give you until February or March, so she could hold it over you for longer. And when I left after 3 years, I had internalized everything she’d said to me. I carried myself with a slouched posture. I apologized for myself in every room I walked into. I applied for jobs that were far beneath my skill set and experience level, because that’s all I thought I deserved. Luckily, the next person who hired me recognized that and let me lead in a role that utilized every aspect of what I could do.

What is something about your career journey that people might not expect? I think almost all of my career journey is something people wouldn’t expect. Most people I work with now are surprised to learn that I spent several years as a voice actor for a number of cartoons and anime - like Pokémon and Yu-Gi-Oh!

Why did you pivot? Every step in my career has been a pivot. From my start in acting to moving over to directing and producing, to nonprofit fundraising. After that, I wound up in political organizing - and all of it kinda made sense - I can almost always go back to my theatrical background. Organizing, fundraising, sales, all of it has a root in storytelling. Telling our stories successfully, and teaching others to tell their stories is kind of the core of what I’ve loved most the entire time. The ability to take the storytelling I learned in theater and translate that to helping others tell theirs in the hopes of changing the world, is incredibly fulfilling.

What skills were portable from what you had been doing previously and what was brand new to you?  As I mentioned, the storytelling piece has always been pretty central. It’s been fun seeing how it translates to each new pivot for me. For fundraising, it’s about telling the story of the organization I’m fundraising for, and the people affected by the work they do. And in sales, I’m telling the stories of people who’ve used the product to great success, and creating narratives to help potential clients see themselves finding that same success. What’s been new is learning the new environments I’m in. Currently, I work with a technology startup, so learning startup culture and SaaS (service as a software) language are both new to me. Before that, I worked with a conference in the impact investing space - for which I needed to learn an entirely new language.

What was the hardest part about making a career pivot? The pivots that have been hardest have been those that take me out of my comfort zone as far as the community I’m working with. There’s always an element of imposter syndrome because with anything new, there’s going to be a learning curve. I’ve been lucky enough to work with people who’ve seen my rather eclectic resumé and been able to piece together what they know will be an effective addition to their team.

What were the most important lessons you’ve picked up along the way?  Everyone is making it up as they go along. Even the experts are making it up. The thing that makes most people experts is confidence in what they’re saying. Sure, hopefully they know a bit about the thing they’re experts in, but in time, anyone can be an expert in anything.

What would you say to others who are doubting their ability to make a change in their career/vocation?  The only thing stopping you is you. It helps to have someone who’s able to see the potential in you and piece together your particular skill set from your CV, but it’s up to you to be able to communicate that. It’s all confidence. If you think you can do it and you do the work necessary to communicate effectively who you are and what you *can* do, you can do it.

Where did you get the confidence and support to make such a change?  For me, it was finding the right opportunity and the right person to trust me with the work. I had the opportunity to prove myself in the work and it took off from there. And if you can’t find the confidence, fake it - we all are.

What was the hardest thing you had to overcome in your professional life?  Finding my confidence again after someone had done everything in their power to remove it.

What, if anything, are you hoping happens next in your professional life?  I’ve always enjoyed teaching and coaching and I’ve just started with a new firm that will allow me to do that in addition to my full time job. That’s what I’m currently most excited about.