Is the Candidate Lying During This Interview? Here’s How to Tell

So much focus is placed on the stress faced by job candidates, but it can actually be just as nerve-wracking on the other side of the table. Unfortunately, it's all too common for candidates to lie on their resumes or during interviews. As a hiring manager, you need to be on the lookout for signs a candidate isn’t telling you the truth. Look for the following verbal and nonverbal cues that may sometimes suggest dishonesty. 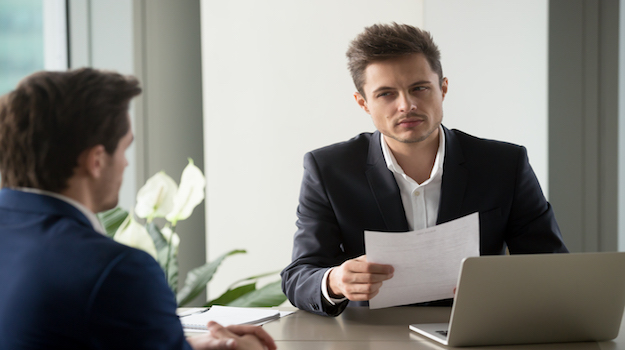 Eye contact or a lack thereof isn't the ultimate "tell" some make it out to be, but it's something to consider, particularly when you're evaluating someone's interview performance. After all, job candidates generally try to make eye contact to express confidence. If you're asking the candidate about a past position, and he or she doesn't make eye contact while answering, it's a good sign that something's up.

Does the Candidate Avoid Using the First Person?

Candidates who take pride and ownership in their past work will generally say, "I did this" or "we did that." If a candidate uses awkward constructions such as "Generally such-and-such would happen," consider it a red flag. This is distancing language, and the candidate is consciously—or unconsciously—putting space between himself or herself and the lie.

Does the Candidate Use Qualifying Language?

Another sign of lying is the overuse of qualifying language or unnecessary descriptors. Instead of saying something is great, the liar will say it's "really great." Now, one extra adverb isn't cause for alarm, but an interview filled with them probably is.

Closely related to this: unnecessary mentions of telling the truth, e.g., starting sentences with phrasing such as "To tell you the truth…" or "To be perfectly honest…" If you're being honest, you generally don't feel the need to announce it.

Does the Candidate Rely on Hypotheticals?

A solid candidate will come forward with plenty of examples related to your questions. Someone who speaks in hypotheticals ("Could have,” "If that happened, I would have") might be less than forthcoming. Again, turning to hypotheticals is another way to play with words to stretch the truth.

Does the Candidate Answer Your Questions With Questions?

Let's face it: there are very few original job interview questions. And a prepared candidate should be able to quickly address most of them. But if a candidate answers a question with another question, or if he or she keeps repeating the question before answering, consider it a warning sign. This is a stalling tactic and another way that someone who is fibbing generates distance from the lie.

Does the Candidate Give Vague Responses?

An overly detailed story can signal a lie in most situations—too many details about, say, someone's inability to make it to a party suggest an overly concocted lie. On the other hand, a vague response in the moment about something that should be easy to answer suggests dishonesty. If you ask a candidate a softball question (for instance, “Talk me through the duties of your last position”), and you get an answer lacking in details, you should start to wonder whether the candidate actually held the position.

How to Figure out Whether a Candidate is Telling the Truth

Throughout the hiring process, there are a few strategies you can use to gauge the truthfulness of candidates. No method is foolproof—some people are just more skilled at lying than others—but you can sleuth out some dishonesty with these tips:

And remember, the clues referenced above are just potential signs your candidate could be lying, but not 100% certain indications. There’s always a chance of a false positive. Above all, trust your gut. If something feels off or less than truthful, it probably is—and it's probably best to pass on that candidate. Better to spend more time looking for the right person now than to deal with the hassle of a bad hire later.