How to Respond When a Coworker Throws You Under the Bus

We've all been there: You're sitting in a meeting, discussing a project that's not going as well as hoped, and suddenly you hear your name. "Well, that was really Olivia's responsibility," your colleague says, and all eyes turn to you. Or maybe you hear through the grapevine that your name came up when a colleague was confronted about a missed deadline. Congratulations—you've just been thrown under the bus. What should you do when a coworker makes you the scapegoat? What's the smartest way to respond? 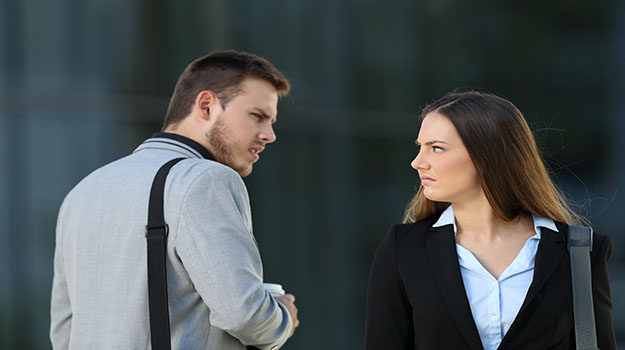 Stay calm and don't fly off the handle

The worst thing you can do is react with emotion. You want and need to respond with a clear head. Take some deep breaths, and excuse yourself as soon as possible to calm down and assess the situation. Remember, if it's a true case of being thrown under the bus, you've been wrongly assigned blame. This is about the other person's issues, not yours, and you need to be smart in your response in order to protect your reputation.

Find support outside the workplace

When you're in conflict with a colleague, it's always smartest to vent to and seek advice from a third party. This is the time to call your significant other or best friend—someone who isn't involved and you can fully trust not to immediately run to the coworker in question. Complain as much as you need to, then do a gut check with your partner or friend to see if your take on the situation is accurate. Whatever you do, don't turn to a colleague, who might be tempted to tell your story around the water cooler.

When you address the situation, ask to speak with your colleague privately. Focus on using "I" statements to explain your perspective. In other words, don't say "You threw me under the bus, which was a really crappy thing to do. It’s really unbelievable you did that.” Instead, say "When you said such-and-such was my responsibility, I felt it didn't accurately reflect the reality of the situation. Here's why…" Keep the conversation focused on the facts at hand, and don't stray into personal accusations or generalizations. If the situation becomes heated, it's OK to say you'll need to revisit again later when emotions aren't running high. (At that point, you might want to involve a supervisor.)

Prevent it from happening again

You don't need to become paranoid about being thrown under the bus again, but once a colleague shows his or her true colors, it pays to be wary. Take steps to protect yourself from future roles as the scapegoat:

Blaming others for your mistakes is a sign of immaturity, and if it's your colleague's modus operandi, others will take note. Rise above and be accountable when appropriate—and don't be afraid to speak up when it's not.