Are Compliments Still Appropriate in an Office Setting?

This one’s easy: welcomed compliments are a positive addition to any social environment, offices included. They help build and maintain social bonds, serve as excellent icebreakers, and can turn someone’s bad day around with a hit of positive energy. Receiving a welcomed compliment triggers the brain’s reward center and make people feel like they’re winning life. 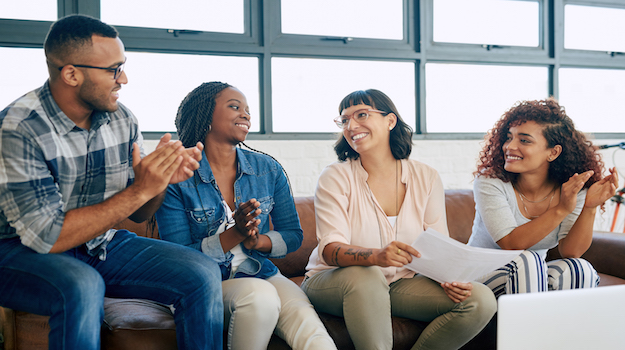 But that answer doesn’t get to the heart of the question, does it? Of course welcomed compliments are nice to receive, yet the difficulty office workers face is determining the line between appropriate and inappropriate. While a welcomed compliment may be a tool for social bonding, a poorly paid, even if well-intentioned, compliment about one’s appearance has the opposite effect. At best, an unwanted compliment can make a work environment an uncomfortable place. At worst, it can be sexual harassment.

Media coverage of sexual harassment tends to focus on the most egregious examples; however, not all cases are as blatant. Many times, sexual harassment is determined less by what is said but by the power underlining coworkers’ relationships or social standings.

The U.S. Equal Employment Opportunity Commission’s website defines sexual harassment as “[u]nwelcomed sexual advances, requests for sexual favors, and other verbal or physical conduct of a sexual nature when this conduct explicitly or implicitly affects an individual’s employment, unreasonably interferes with an individual’s work performance, or creates an intimidating, hostile, or offensive work environment.”

That Sounds Straightforward Enough, But The Commission Further Notes:

In other words, the line between a compliment and harassment is conduct perceived by someone else as unwelcome, unwanted, or offensive. It is not based on the intentions of the person conducting the behavior. You may think your compliment about her attractive new hair cut will flatter, but if she’s uncomfortable, you’ve crossed the line.

Given this subject matter, we want to be very clear here. No one is going to be terminated for a single lapse in judgement. The EEOC website clearly states, “the law doesn’t prohibit simple teasing, offhand comments, or isolated incidents that are not very serious,” but behavior is deemed illegal when “it is so frequent or severe that it creates a hostile or offensive work environment or when it results in an adverse employment decision.”

The Rules Of Compliments

One potential answer to our question is that compliments about appearance aren’t appropriate, and you shouldn’t discuss them. “You look great for your age,” “Have you lost weight,” and any similar commendation revolving around physical appearance is best left unspoken.

This extends to age, gender, and ethnicity, as well. For example, “You’re one of the better male trainers” can be viewed as critical, not complimentary. You may be trying to compliment the recipient, but the qualifier “male” can be taken to mean that the person’s skills are limited because of his sex. Obviously, such compliments would be unwelcomed and could get you labeled as the office’s negative coworker.

However, we’re not automatons, and a compliment-free social environment would feel rather…robotic. Another possible solution is to stick to compliments of appearance that you would give freely to anyone, regardless of ethnicity, age, sex, and so on. Consider the following three examples:

Option one is the safest bet and it can be recommended in almost any situation. After all, it makes your coworker feel good for their fashion choice, but the compliment is paid to the shoes, not the person or their appearance.

Of course, the best answer to our question is that tone, context, and professional relationship are everything when giving a compliment to a coworker. Coworkers who have known each other for a long time or spend their off hours together will obviously have a different rapport than those just getting to know each other. Supervisors may not be able to compliment a subordinate’s appearance as readily as an executive’s due to the uneven power dynamics.

While this answer is the most accurate, we know it’s hardly the most helpful. Tone, context, and relationship can be difficult to define and will vary wildly between every pair of coworkers and different office cultures.

Are compliments still appropriate in an office setting? That depends entirely on you, your coworker, and the compliment.