Office romance seems to work out on the screen. “His Girl Friday” comes back, and Meredith gets her Dr. McDreamy—at least for a while. And in the real world, there are spouses who work successfully side-by-side and dating coworkers who manage to keep church and state separated. 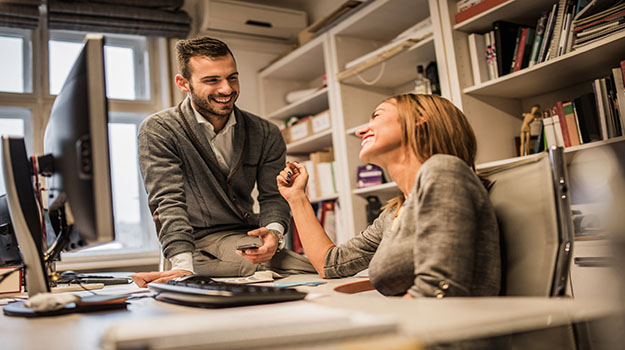 This encourages people to believe they, too, can mix business and pleasure. They’re sure that even if the romance ends, the professional relationship won’t be damaged. Best case scenario is…best case scenario, so before you take the leap, see if you’re buying into any of these six office-romance myths.

1. No one will find out about your workplace romance

You’ll never go to lunch together and avoid long, lingering glances. Displays of affection on the job are definitely off limits.

But despite your stealth, at some point you’ll run into a colleague or client outside the job and tongues will start wagging. Coworkers will string together enough innocuous comments to come to the correct conclusion.

Your first line of defense has crumbled. Suddenly, people know. And if they know, they’ll be watching.

2. It’s nobody’s business whom you date

It seems intrusive, but your employer probably has a legitimate business reason for wanting to know about an office romance.

A romance gone sour can lead to a lawsuit or EEOC complaint involving the company. At least one state, California, has ruled that a workplace relationship created a hostile work environment for the couple’s coworkers. Relationships between employees and contractors have led to expensive litigation, too.

These can include “love contracts” that make it clear the relationship is consensual and both parties are aware of harassment policies and laws.

Perhaps the biggest change at work will result from trying hard to avoid change. Maybe you’ll hesitate to enthusiastically endorse your sweetie’s idea in order to avoid colleagues’ eyerolls. Or perhaps you’ll be overly critical in order to prove you’re still objective.

And you can bet some coworkers will home in with a laser-like focus for any signs that pillow talk is affecting policy or performance.

4. Favoritism won’t be a factor

This is particularly true in relationships between supervisors and subordinates, even if the couple isn’t in the same department. Access is currency, and in a highly competitive environment coworkers will look for signs the subordinate is getting more opportunities or enjoying relaxed expectations, according to a paper in the “Journal of Organizational Psychology.”

The boss won’t emerge unscathed, either. Managers might hesitate to tell supervisors everything they need to know if they fear they’ll share confidential information with paramours, the paper said.

It’s hard to look toward the ending at the start, but in the case of an office romance, it’s essential.

Of course, both parties are going to vow to remain mature and professional at work, but that’s not always possible. The end of a relationship is difficult, even if it’s amicable. It can be a challenge to treat someone the same as you did when everything was sunshine and roses.

Consider the ramifications of never being able to get past an ex- because you keep passing him or her in the hall. Even worse—what if one party moves on to another relationship before the other has completely let go? It’s a common scenario made even worse when you can’t escape witnessing it.

6. Both partners are equally at risk

In most situations, women in office romances have more at stake than men. According to a study at West Virginia University, most people view workplace romances negatively, and most of their annoyance is directed at the woman.

There are a few caveats: a later study by Australian researchers found that in boss-worker bee romances, the worker suffers more. They’re less likely to be promoted or picked for training opportunities. And the negative ramifications were greater for men dating the boss than for women.

In an era when we spend so much time at work, it’s tempting to give an office romance a try. And while it could work out, the odds are against it. The best solution: if you see yourself getting serious about a coworker, one of you should find a job elsewhere. If neither is willing to do that, it’s probably a sign that it’s not meant to be.